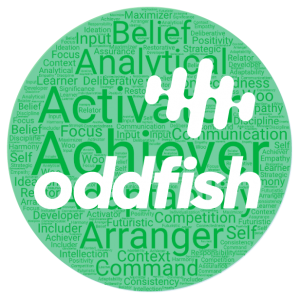 We get people asking us what’s behind Oddfish and why?

Well, it all began when our head honcho, Brianna and best friend Katie (now second head honcho), were hanging out one Sunday afternoon in 2015, flicking through the box (before they discovered NetFlix was addictive) when they came across Sir David Attenborough’s show titled Life Story. It was the part about an unknown Japanese puffer fish who did remarkable things on the ocean floor that amazed them.

The little guy called white-spotted pufferfish (Torquigener albomaculosus) had stumped scientists for years. He had been doing his job, using his strengths to build intricate designs that people couldn’t explain. The mysterious circles on the seabed were so amazing, it took everyone by surprise when they discovered it was a small pufferfish who was responsible for the remarkable designs that took him a week, as he worked 24 hrs days to complete.

We at oddfish, believe that we are all fish swimming in the sea of life. Everyone possesses a uniqueness that helps them to evolve and move along in their journey.

These unique traits can be seen as: potential, talents or capabilities. Only problem is, we don’t intentionally use our talents and strengths enough. For some they don’t know what their strengths are. The science of positive psychology and science of strengths have proven that people who use their strengths will far outperform than those who concentrate on fixing weakness. The research of Donald F. Clifton (father of Strengths-Based Psychology) found that, people that intentionally identified and employed their talents and strengths, benefited them in their work and were successful as a result. Further research has found that, as organisations that take a strengths approach, have engaged employees who work with passion, drive innovation & move the organisation forward.

The philosophy of building on peoples strengths to achieve outcomes, was something that felt right and natural to Bree and Katie. They loved the fact that science and research backed what they thought was amazing. The strengths approach would pave the way for Odffish to come to life.

The name Oddfish, represents the little pufferfish who although may seem the same as any other fish in the sea, is truly remarkable because of his strength that drives him. This makes him odd and stand out in the crowd.

Our logo is a celebration and appreciation of the remarkable artwork on the sea floor. It also aims to represents the two parts of the human brain working in unisons turning talents into strengths. According to Gallup, a strength is the ability to consistently provide near-perfect performance in a specific activity. Talents are naturally recurring patterns of thought, feeling, or behaviour that can be productively applied. Talents, knowledge, and skills — along with the time spent (i.e., investment) practicing, developing your skills, and building your knowledge base — combine to create your strengths.

We wanted to represent this by having the lines connecting as neural connections formed by axons that project signals from neurons to make synapses onto neurons in another location. The green in our logo represents intelligence and energy.

Oddfish is founded on values that we believe are true to our core and reason for existence. We believe that through our scientific knowledge and lived experience we can enable people to be the best version of themselves.

We are grounded in values that define our drive. Our values help create the strengths-based culture the enable us to be remarkable.  We believe that we are true to our values and we want everyone to know what our values are:

Our focus as Strengths Coaches and Organisational Development Specialists, is to help leaders, individuals and teams in organisations drive performance by leveraging strengths and accomplishing key professional goals.

We want the people we work with to become the best version of themselves. We want them to be remarkable…

BRIANNA ABEL
Bree spent 15 years in the finance sector where she developed and built teams of high capacity leaders. In 2014, Bree and Katie developed Oddfish, to bring out the best in people.

EMAL NIAZI
Emal brings valuable marketing and info systems experience. He also was a wise economics teacher for over 10 years. We call him the tech savvy sage. He now helps people be remarkable.

KATIE KING
Katie is king of strengths. She owns the Q12 assessment. Her amazing insight drawn from her science career earns her the title of “Metrics Royal”. She uses her royal powers to bring out the best in people.

FINN McCOOL
Finn at Oddfish is known as Son of Mac. He brings immense technology experience. An avid apple lover, his head has been in the cloud for over a decade. He now helps people leverage their strengths.

PAGE MILLER
Page has 12 years experience as an accountant. She is now one of our senior Gallup Strengths specialists in Govt. She helps people realise and apply their strengths. Page means business.

CANDICE CARTER
Candice is ear candy. As a writer and editor her career has seen her write copy for print and web, for the biggest mobs in Australia. Candice is also cat enthusiast and wants to bring cat olympics to Channel 9.

FULL 34REPORT
GET IN TOUCH

FULL 34REPORT
GET IN TOUCH

Q12ORG ASSESSMENT
GET IN TOUCH

GET IN TOUCH
Go to Top